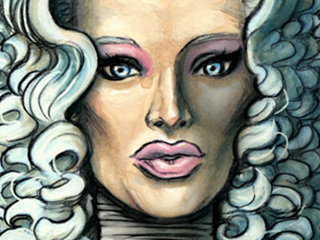 Hi there! My name’s Amanda Honeyland and I’ll be your hostess, I’ll be the one leading you through this whole presentation process. Ferran Xalabarder, the book’s “author”, is not very good at doing so, besides the fact that he’s gone a little nuts lately (too many time working on Oniria) …So he asked me to do the public relation work and I accepted. After all, this project is as much his as it is mine, since it’s about the story of my life.

I hope you enjoy the ride… at least on this current presentation.

Oops! It’s true! …as an end for this short introduction, clicking on the following link you can find an animated video… a trailer of some sort that Ferran made to present the first book of the saga:

With this whole project we pretend to publish a four books trilogy… Oniria: Genesis, Oniria: Revelations & Oniria: Apocalypses. Yes, a trilogy in four books is not very usual, but I have to recognize that the Apocalypses issue was too long as to fit in one single regular volume.

This creation journey started in a collection of short stories that Ferran Xalabarder illustrated & wrote based on my oneiric adventures. Some of those stories were published a while back at the Heavy Metal Magazine http://www.heavymetal.com/, but he became fond of the two girls, the two main characters (speaking bluntly, he got fond of me, overall, though he will never recognize it in public… 😉 Since then, a weird bond was created in-between us, and my experiences kept flowing out of control into his mind until reaching the size of this mini-saga. The idea is to put all the stories together, in chronological order, corrected, amplified, remastered and give them the final paper treatment that every comic saga requires and all the fantasy reader-fans deserve as to be able to enjoy it to the max.

Well, at least that’s what Ferran told me to say here…. To be honest, the real reason behind it, I’m afraid, is the fact that he needs to take this crazy world out of his mind in order to be able to rest and properly sleep by night. Not everybody is prepared to bear such an insane realm in mind, and much less for so long. So, deep at the bottom, this whole project is nothing else than a healthcare mission, a mental balance issue. I know he will kick my butt just for saying what I said, but I think you deserve to know 😉

The idea is to publish one volume in English every 9 months or so, to give Ferran the time to finish the two books left on the Apocalypses. Pitifully he cannot dedicate all his time to the saga. The two first 68 pages’ books are fully completed and ready to print already, and the first volume for the Apocalypses is almost half cooked… (the final pace, though, will depend on the work timing).

“…I tell you, I swear, here, next-door, there is this oneiric realm outside time & space, a void in-between braincells, an insane dimension where everything’s possible and nothing makes sense, a realm called Oniria where even Mr Sandman doesn’t dare.”

I don’t want to scare you, but reached this point, I have to warn you: this is not a comic for children, this is a comic oriented only for adult readers…. And not for every single adult one. There is a requirement here: we are looking for very open minded adult readers.

When it comes to the story, in short, I can say that this is a mix of a Sci-Fi and a fantasy sagas. It’s a tale about two women from an alternative future, Ms Frosy and I, who, against their will, were embarked upon the most hallucinating adventure of their lives inside a fantastic oneiric realm. Fused together in a single body at the very beginning, they tried… we tried, what the heck, to adapt the best we could to our new shocking environment and condition, while dealing at the same time with the most hidden traumas of our own. What we discovered at the end is something that couldn’t fit in my mind before I was forced to open it with such a mind-blowing experience. This is the amazing journey into a world called Oniria… a world full of a little bit of everything that dreams are made of, using some kind of a Shakespeare’s quote (Hah! and some call me uncultivated bimbo 😉

Wait! …Do you wanna know a little more about Oniria? Was my chatter too messy as to understand a thing? …No problem, guys! Here you have the synopsis from the back cover of the book.

At the early stages of 2013, a massive polar flip changed the world we know forever, creating an alternative future, a parallel reality. From the ashes of that world emerged a fanciful system called Utopia. And that’s where the story begins…

The ONIRIA saga tells the tale of two completely different women, two Utopian citizens, Amanda Honeyland and Ms Frosy who, abducted by a mysterious entity, are fused together in a single body to embark, against their will, upon the most hallucinating adventure of their lives inside a bizarre oneiric realm. They’ll soon realize that Oniria is the name of that “place”, a colorful void out of time & space, where all dreams and nightmares interlock to create a liquid and crazy world where everything is possible and nothing makes sense. A world full of a little bit of everything that dreams are made of. An outlandish kingdom populated by its own particular creatures and entities. An insane domain where “Gods” use to play their twisted mind games…

Step by step, madness after madness, Amy & Ms Frosy will deeply sink into that screwy realm. And, enslaved by a weird creature called the Dreams-Eater as they are, they will try to adapt the best they can to their new shocking environment and condition, while dealing at the same time with the most hidden traumas of their own. The usual that happens when your brain must handle an experience barely intended for a human mind to comprehend… But this is part of the plot… someone’s plan requires that the two girls go through their most hidden traumas as to unleash the fantastic and epic almighty confrontation that will take place at the end… It won’t take too long for them to discover that they are merely toys in hands of superior forces.

The Oniria Trilogy is, perhaps, Ferran’s more personal & hallucinating piece… so far. And I’m not telling it just because of personal interest or motivation, believe me. If you like to be surprised while entering page by page into the wildest fantasy realms, this is your books saga for sure.

The artwork was realized with a combination of hand painted artwork and computer finishing.

Here you can find a few links to what some Heavy Metal readers said about some of the Oniria chapters:

In this chapter, since he was the one dealing with all the “dirty” work, I wanted to mention Ferran first, but he didn’t let me do it. He told me; “No way, ladies should go first. Besides, this is your story, after all”

And well, yes, I didn’t draw or write a line, but, somehow, I feel responsible myself since I was the one who, in Dreams, whispered all this crazy story inside poor Ferran’s mind. Sometimes I have the feeling that I played a dirty trick on him. Probably that’s the reason why I’m trying to help him now…

I think the best way to know about me is reading the pages of this oneiric saga; my oneiric saga. Believe me. I don’t have such a long curriculum in this world of yours to show around… though, you can know me a little by just clicking on the following links if you wish:

Ferran Xalabarder, or my artist as I like to call him, is an illustrator from Barcelona, Spain, with experience in almost every single field I know in the visual story-telling world. Between many other things, he worked on the movies and comic books that follow:

-He worked as story-boarder on the FOX animated movie “Anastasia”.

-He worked as conceptual artist on the FOX animated Sci-Fi movie “Titan AE”.:

-He’s been publishing numerous short stories with script of his own in the Heavy Metal Magazine like: “The Key to Valhalla”, “Game Over”, “A Space Trifle”, “The Black Hole” “The Starke Mansion Affair”, etc…

-He made the pencils on the Platinum Studios Graphic Novel “NightFall”. With script by Scott O. Brown.

–“Salvaje: The She-Wolf Ballad”, A sword and soucery graphic novel on a script of his own that hasn’t been published in English yet.

And here you can find an interview at Comic Crusaders to know a little more about him and the creative process for “Born in Hell”:

Or send us an email to westwindcomics@gmail.com showing us your interest.

This way we’ll be able to reach you wherever you are when we have it ready / De esta manera podremos ponernos en contacto con vosotros donde sea que estéis cuando la tengamos a punto.

Thank you so much for your time & consideration.

A box full of Super Big Kisses to every single one of you!

See you around, guys 😉